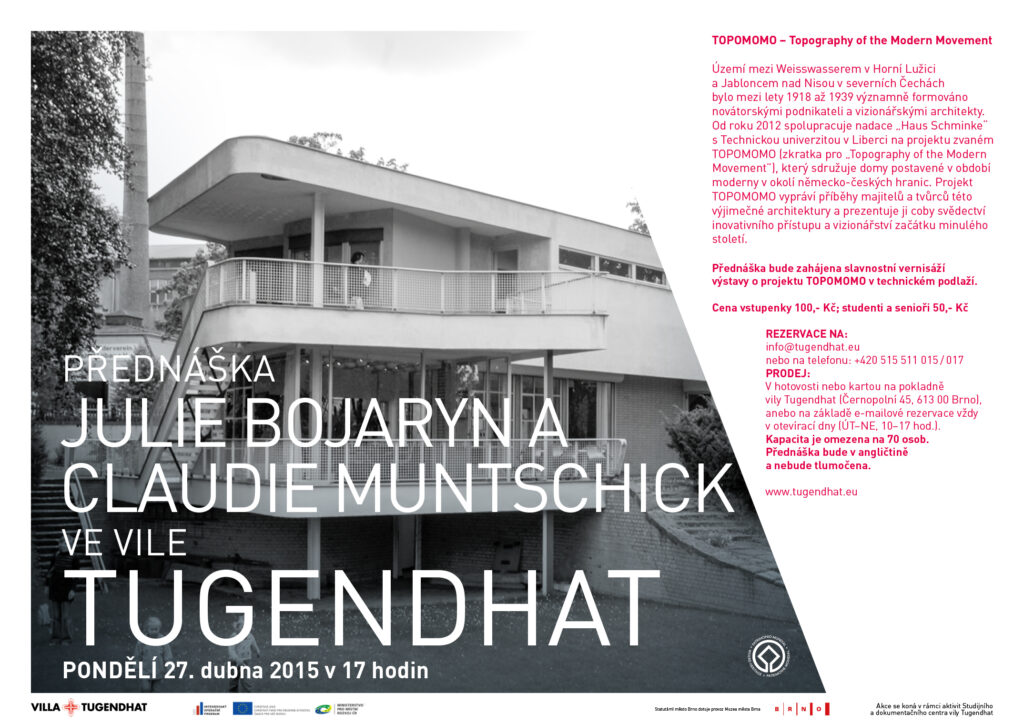 TOPOMOMO – Topography of the Modern Movement

From 1918 to 1939 the area between Weisswasser in Upper Lusatia and Jablonec nad Nisou in Northern Bohemia was characterized by innovative industrialists and visionary architects. Since 2012 the Foundation „Haus Schminke“ and the TU Liberec have been creating a network called “TOPOMOMO“ (short for „Topography of the Modern Movement“) to connect buildings of the Modernist Movement in the German-Czech border region. TOPOMOMO wants to tell the stories of owners and designers of the stunning architecture and present their building heritage as a testimonial of the visions and reforms at the beginning of the last century.

Claudia Muntschick studied architecture in Leipzig and Dresden and earned her diploma and an additional Master’s degree in Building Heritage conservation and Urban development. She has been involved in the Foundation „Haus Schminke“ for several years. In 2012 she assumed the leadership for TOPOMOMO.

Julia Bojaryn is a structural engineer who graduated in Cologne. She met Claudia Muntschick at the Master’s programme at the Technical University Dresden. After organizing several school and student projects at the Haus Schminke together, Julia Bojaryn joined her colleague and TOPOMOMO in 2013.

Both are eager to promote the astonishing history of unknown Modernism in remote regions. They are currently working on starting a following project connecting Saxony and Poland.

More info on TOPOMOMO can be found here: www.topomomo.eu

The lecture will be held on Monday, 27 April 2015 at 5 pm. At the beginning we will introduce exhibition about the project TOPOMOMO (a tour of the villa is not included in the lecture).

The lecture will be in English and will not be interpreted.

A poster for the lecture can be downloaded here.